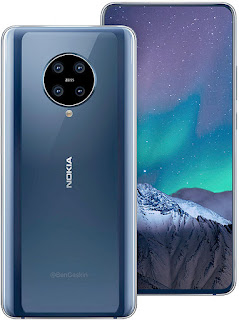 Nokia was a market leader back in the early 2010's and soon started to fizz out of the market when it decided to lean towards Microsoft's Windows instead of Google's Android. People talk about this grave business blunder even today and discussed as a case study under "things not to do when you are a market leader". Unfortunate as it may be for Nokia, they have heavily downsized their workforce since then and even sold their brand rights to HMD Global which now sells smartphones under the brand name of "Nokia". If you are one of those people who owned a Nokia phone (not a smartphone) , your brain would instantly trigger an audio of the Nokia ringtone.
Now, Nokia may have tried to make its way back in the smartphone business but has been heavily lagging as compared to its competitors. Main reason being the funding and out of trend specs for hefty price. They have introduced the 3 series, 5 series, 8 series and even the flagship 9 series of smartphones which according to me is a good move. What they have been trying to improve is match up to the competition, but every time they release a product , it's atleast six months behind its competition like Xiaomi,Oppo,Vivo, Oneplus and Samsung.

There's sort of an exception in their Nokia 9 Series which is the flagship series, where Nokia has tried to get back to its roots - innovation and creativity. In face Nokia was the first one to launch a product with Wireless Charging and High Resolution Camera way back in 2012. Adding to the list of 9 series, is the new Nokia 9.3 Pureview which would drastically count down the PentaLens structure from the Nokia 9 to mere Four lens structure. Nokia 9 Pureview was a unique piece of smartphone which had amazing camera tech with bit outdated specs. If only they had managed to give it a bit of higher RAM, faster Processor and thicker battery backup , it would have been the phone of the year. Things have some what improved in the Nokia 9.3 which houses the Qualcomm Snapdragon 865 ( phew!) with 8GB RAM and 128GB Internal Memory. It would have a 6.7 inches P-OLED display with about 481 PPI pixel density and support for HDR10+.  It would be interesting to see if they come up with 120Hz refresh rate display , but I highly doubt it given the trend of Nokia phones that always lag with the latest tech. That and throw in a bit of curve on the edges of the screen - as has been the trend in 2020.  Here's a concept video which is a bit to exaggerating but could be right in some areas :


The Camera module on the Nokia 9.3 Pureview is the one of the main reasons which catches attention of many because of the perfect choice of sensors - 108 MP Primary (with Optical Image Stability (OIS)), 8 MP Telephoto, 13 MP Ultrawide and 3D Time of Flight for portraits.  I can understand the use of 108 MP was to just appease the spec mongers, but what I would have excited to see is this combination - 64 MP Primary + 32 MP Telephoto + 24 MP Ultra wide. This would have covered all the bases of  resolution + feature enhancement perspectives. On the front we have the selfie camera of 20MP Ultrawide coupled with 3D Time of Flight sensor for the perfect portraits. What I'm impressed about the camera is the video capabilities - the rear camera can record 8K@30FPS/ 4K@60FPS/1080P@120FPS. Now, that is really cool! Super slow mo has finally been mastered by Nokia in that. I also hope Nokia keeps it most revered feature from the Nokia 9 Pureview - ability to take RAW images. That's something that's not found much these days except for few like the Sony Xperia 1 ii.

Coming to something that will prevent you phone from dying of in the middle of the day, the Nokia 9.3 Pureview will pack a massive 5000 Mah battery with Fast Charging Support which should be more than sufficient to last more than day of use. Now, there's no mention on the Wattage of the power brick , but I'm going to go out of a limb and predict 18W Fast Charger. It also comes with in display finger print scanner as is the case in most of the flagships these days. With respect to communication , which unfortunately is the last part of this list , it is expected to support 5G and WiFi6 standards. Though, it would be interesting if it would ship with the same in India as 5G hasn't yet picked up over here.

I know most of you would have first scrolled down to this section, looking out for the price :P. It could be a bit of disappointment as the Nokia 9.3 Pureview is expected to be retailed at around Rs.64,999 - Rs.69,999 in India. In the US, the pricing could be close to $800 - $900 USD. Whether it's worth the price or not, we will have to wait and see when we get to see it in the hands of  the users. It's expected to be launched in August 2020, but due to the COVID situation it could clash with the release of the iPhone 12 , which may not be the best time to launch a flagship. Until then Stay Safe people.